Is this the summer I finally build that Imperial base? Budget and time permitting, that’s a firm maybe – but hey, this is a good start in my book.

I’ve always wanted a sprawling Lego base full of Imperial troops, functioning rooms, and little stories being told in the scenes, like movies without motion and focused more on background detail. For whatever reason I started with building up a large grey baseplate, and then decided to put a medical bay on this first floor. Having a med bay in the base caught my attention first for some reason, maybe because I have a lot of people in the medical field in my family? I also always thought bacta tanks were really cool – from The Empire Strikes Back to the very similar healing chambers from Dragon Ball Z, there’s just something brilliant about magic sci-fi healing tubes full of goo. 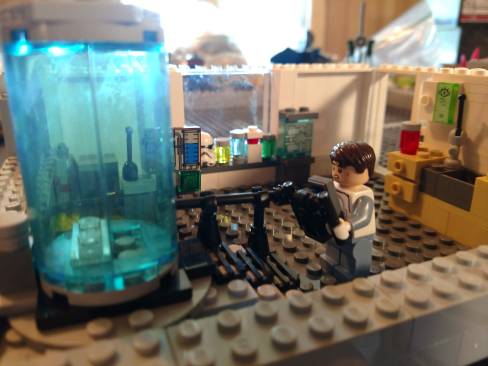 Here we have a loyal Imperial medic using his datapad to check the bacta tube out before its next use. I used a 1×2 clear trans plate inside to give a figure a floating effect. And I’m also going to stock up on some plain black torsos to create the undersuits for Stormtroopers, which they’d probably wear inside the tank (instead of the Luke Skywalker diaper from ESB) In that window I made some Easter-eggy items, power-ups from Pandemic’s Battlefront II. There’s the stamina refill (yellow), bacta pickup (light blue), ammunition canister (white with red), and a defense boost (green.) On the counter you could either call that red one a rage/damage increase pickup or perhaps a blood sample. And I couldn’t resist buying that X-ray screen I when I saw it on bricklink – the trans blue screen shows skeleton minifig legs, and one is marked with a break/fracture. 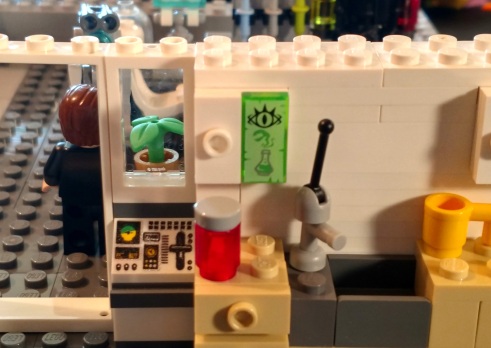 That doorway is just a placeholder for now – I wanted a definite pathway between the two rooms. This angle shows a terminal, cabinets, and a sink for cleaning up. I am so happy to have found that random green piece with the eye on it in an Elves set. The eye and beaker are supposed to represent some poison-themed villain I think, but here I’ve used it as a sign reminding medics to wash up immediately if their eyes are exposed to any chemicals. 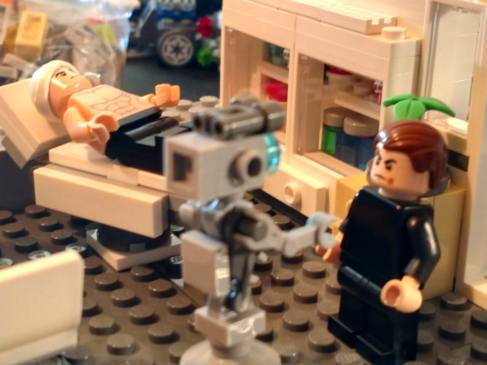 On the flipside of the door we have a custom medical droid I designed, with a boxy head and three eyes. Here he’s seen taking care of two wounded soldiers, one with some minor scrapes on his face (right, thanks to the injured bad guy faces from the Spider-Man: Homecoming bank robbery set) and a second on the left nursing a head wound under those bandages.  Behind them, a cabinet is stocked with more medical supplies. 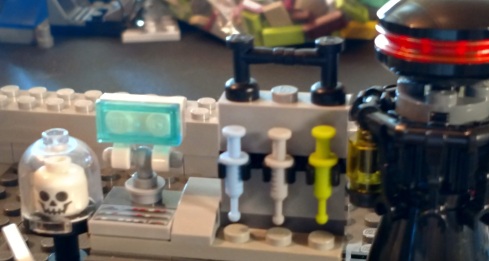 Opposite that supply cabinet is a desk with another terminal, which locks down these syringes to prevent theft. A skull sits in a specimen case nearby, and on the other side a FX-7 medical droid (from the recent Vader Transformation set) stands ready to assist the Imperial medical staff. I plan to expand with some resting/recovery areas possibly intermingled with trooper barracks on this floor.

As soon as more gets done, I’ll post more updates on the base. It felt good to finally get started, and having it started means there’s always something to come back to and improve upon.