Or “A New Hope: Why the High Republic isn’t the Old Republic, but that is Alright Probably. And Star Wars discourse is incredibly annoying.”

<Insert newest Star Wars topic> was released in <insert year after 1983> to ‘mixed reviews’ and a vocal minority was harshly critical of every facet of it, from the writing, writers themselves, lore direction, characters, and not being <a particular movie that was already released, probably Empire because everything is inevitably compared to Empire.>

Congratulations, you have just read the entire discourse surrounding not only the reveal of Star Wars: The High Republic, but probably any project going forward. 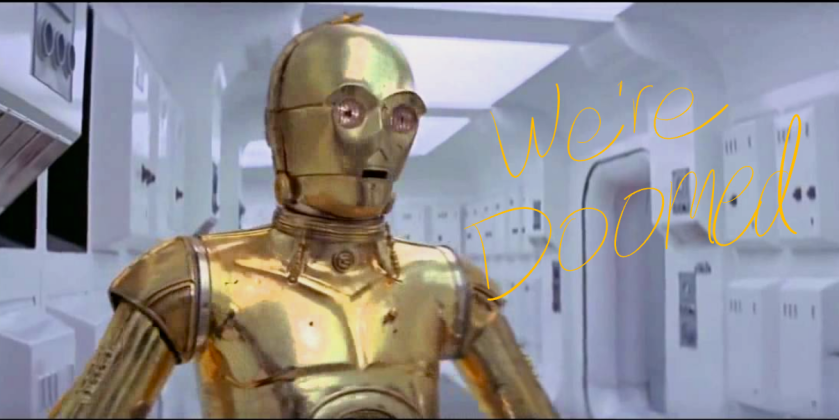 The High Republic has been officially announced. What does that even mean? Didn’t the movies just do a bunch of stuff centered around the New Republic? You probably aren’t the only one with that question in mind. If you are curious though, don’t turn to any comment section on YouTube. While the things I’ve seen on my preferred platforms (Reddit and Instagram) have been generally civil and respectful, the YouTube comments surrounding the reveal trailer less a hive of scum and villainy and more of a place I desperately wanted to leave, but couldn’t turn away from.

The volume of vitriol, drama, and hate was simply staggering. And this was just the reveal trailer. These are things that haven’t even been seen, read, or consumed by the public yet. The new era was revealed and we got some book and comic titles, and apparently a vocal minority on the internet, once again, hated all of it.

So rather than talk about what The High Republic isn’t all about – because really, what would be the point in all that – I wanted to talk about what an exciting idea this actually is, and point out some inaccuracies within the comment sections you might be running into.

This is a common thing throughout the comments, people hating on the High Republic because it isn’t the Old Republic. Well, straightaway from the names you can see they are different things. Despite bad spelling also being a common theme, people don’t seem to A.) Understand that this new era isn’t replacing the Old Republic, and B.) Understand both can exist. You see, the Old Republic timeline (we’re talking Legends continuity here) extends all the way from 8,000 years before the events of The Phantom Menace film up until about 1,000 before Phantom Menace. The High Republic, in contrast, is only going back to 200 prior to the films, meaning that aside from referencing previous events that may have happened, it won’t even touch the Old Republic timeline as very few Legends items were even written in that thousand-year gap.

This new part of the pre-film timeline will explore the Jedi at their greatest, where they acted as protectors rather than clone army generals. A new enemy known as the Nihil have appeared, and the writers liken them to space vikings, marauders who steal things for their own from the expansion efforts of the Republic. Surprisingly, we haven’t seen any new Sith Lords pop up in the concept art, meaning that the Sith may well be still in a thousand year long period of dormancy, just like in Legends, before Darth Sidious and Darth Maul appear with the intent of destroying the Jedi Order. 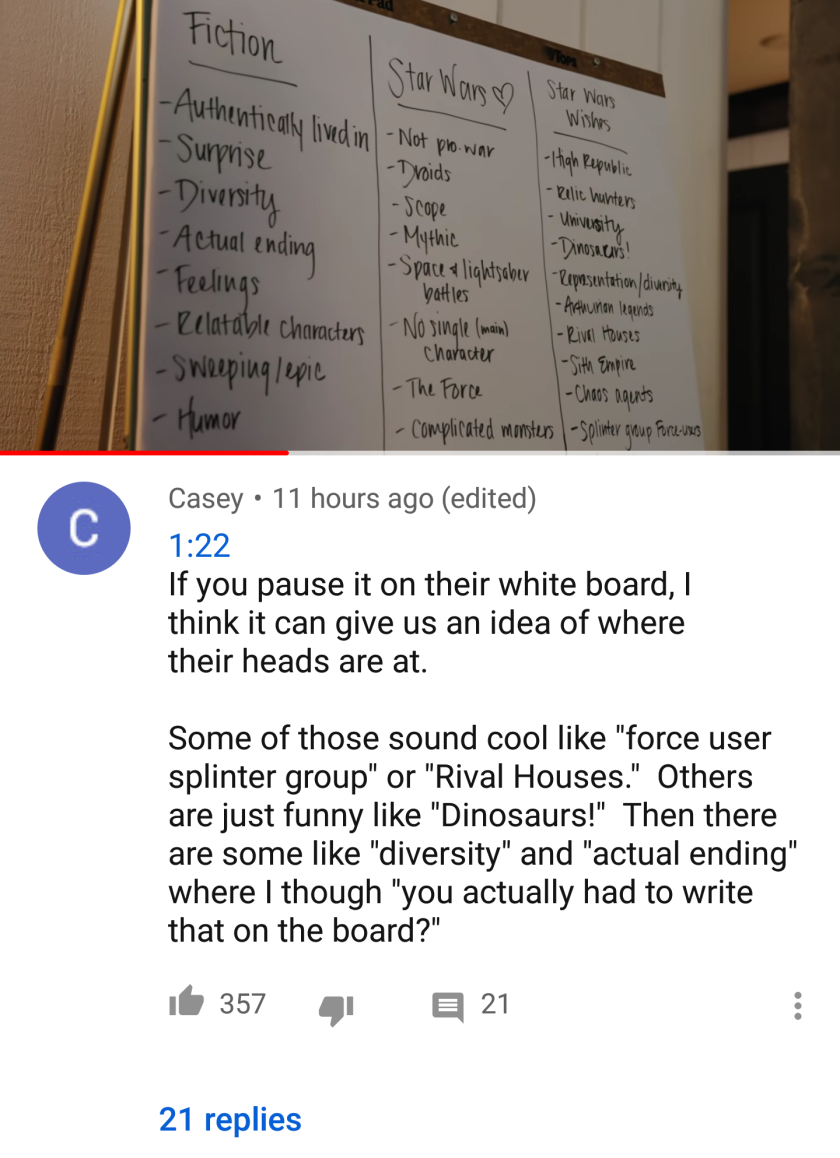 In what I’m sure will be a meme of some kind, this white board shows some of the thoughts the writers had at some point during some meeting or another. I say it that way because you really don’t know when this took place, how concrete these thoughts are, or – like the comment points out – if some are meant to be more humorous or just reminders of things. But there are so many comments that take it to another level, beyond this level-headed civil remark. Most of these ideas are called out as the usual social justice warrior nonense, things being crammed in to make the stories more inclusive and somehow less enjoyable. And to that, I just have to wonder what rock people are living under.

I pulled a dozen or so screenshots together to show just how bitter the reveal trailer comments were, but I’ve decided not to give them any more spotlight. It’s all they want in the end, and at this point calling out fanboys on their nonsense isn’t doing anything. I’m excited for the High Republic to become a part of Star Wars, dinosaurs and all if that white board is to be taken as seriously as the internet takes it. (For the record, Star Wars has had dinosaur-like creatures more than a few times at this point.) These toxic rants by entitled fans are sadly nothing new.
Spotlight in the Stars:

A major problem with shouting into the internet comment sections about something you disagree with is your expectation of an end result. You got upset about Star Wars, a bunch of people made a noisy mess of their new project reveal. Now what? These new projects aren’t cancelled. The writers might feel bad or personally attacked, but they aren’t going to stop writing the things they feel passionate about. If I took a refreshing sip of Coke every time a commenter tried to turn prequel dialog into ironic dissappointment. . .well, I’d die and I wouldn’t know which bitter taste ended me.

I feel like the people making these comments don’t actually feel this strongly. For one, Star Wars teaches us a lot that can be applied to real life once you strip away lightsabers and those tight pants with the stripes down the sides. That didn’t sound right but it’s staying in. Focusing on your hatred and becoming disillusioned are pathways to deeper hatred, fear, and isolation. Pretending to suffer because you believe Disney is giving you the “wrong” Star Wars will lead to miserable suffering but guess what, the Mouse isn’t mourning you. They’re going to keep making these new things. Sure, it’s all about money, but there are clearly passionate writers and artists who have grown up with Star Wars in their lives. They want it to continue to be in their lives, just like you do, and they’ve been given the chance to impart what they’ve learned into new takes on the mythos. A creator is not obligated to ask you for the art you believe you are owed. Truth hurts, but artists don’t owe anyone anything (school loan debt not withstanding.)

Artists create and the public reacts. The public reacts, the artist creates. There’s no interview process here, it’s all based on perception of the world around us. How insufferable would Star Wars actually be if it stopped to ask how you feel every five minutes? “Yoda is going to speak most of his lines out of order because that makes him stand out and sound more wise, are you good with that? Oh, too much? He should just be another white guy with a beard?” Nothing is ever going to change without ideas being put out there and just tried out. If we don’t like it as fans, we can try to recontextualize it and hash it out later. Hell, we’ve been doing that for decades and we’re just now upset by by the notion of it for some reason.

Which leads me to my next point – remember when everyone hated The Last Jedi until around the time Rise of Skywalker came out? They all turned pretty harshly against their own hatred of TLJ in favor of hating on the newest film. My point is, you can’t take internet discourse too seriously. Sure, I was upset when I first saw those comments on YouTube. It was a miserable experience. I can’t let the comments go as people just venting though, because that stuff doesn’t go away unless it’s physically removed from a page. It’s just there for the world to see, regardless if anyone still feels that way. I can’t say there should be an expiration date on internet comments, but people hearing about this new era of Star Wars media will look to comment sections to see what’s up. And they’re going to be let down by miserable fans who can’t help but spread that negative aura all around and move on to the next miasmatic forum where they think they might be heard.

Admittedly I started this blog because I wanted to be heard too. And the internet gives everyone a spotlight if they really want it. But shine a spotlight into the night sky and what happens? Well, Batman turns up of course. No, wrong franchise. It actually blocks out the stars, makes it too bright to see anything. Everyone wants to believe they are the wittiest commenter, and getting their words out and moving onto the next thing trying to harvest imaginary internet points and likes only clutters things up for what should truly be shining – the actual post, the project reveal, maybe the people paying to host their content. A place where ideas, thought-out criticisms, and respectful reactions should take place – you know, like any public forum – is instead a polluted mess of bitter reactions and bad memes that will age like blue milk.

Reactions aside, I’m excited to see what becomes of the High Republic era of Star Wars. For the people that are already upset with something they know next to nothing about, I have to ask what they were expecting. This isn’t the new Old Republic, and those upset by the movies rehashing similar themes can’t justifiably be upset by books and comics trying to go in a new direction with something besides Jedi versus the Sith. We’re also going to see Jedi that aren’t as pro-war as they appear in the Clone Wars era. Like it or not, they’ve become pro-war in that timeline, and the infamous white board saying these new Jedi are not pro-war is not only accurate but intriguing.

This new Star Wars project might not be for you. It might be your jam. Both are okay. But you’ve got to at least give it until release before you write it off entirely. Would we have Revenge of the Sith if not for the mistakes made along the way with Phantom Menace and Attack of the Clones? Would The Clone Wars have had a proper launch without it’s movie adaptation, regardless of how that thing aged? It’s okay for entertainment to be bad, not live up to your expectations, or fill your personal excitement-o-meter to max the instant you see it. But to shut something down immediately is to close yourself off not only from what you perceive as bad, but also the good things you might enjoy and never get to know about.

Expectations are a dangerous thing. Keep them in check, and don’t become a miserable comment troll arguing in the forums. I promise you are better off finding things you enjoy instead of harping on the things you don’t. It can’t upset you if it doesn’t even cross your mind. Let go of your anger like the movies taught you.

So anyway, as usual this thing changed from what I initially had in mind. Hopefully for the better. Thanks for reading!