All good things must come to an end, it seems. After weeks of speculation, Toys R Us has announced liquidation and store closures, ending a career that’s spanned over 60 years. There’s plenty of questions about what exactly this all means, the stores not existing anymore aside. So for (most likely) the last time, let’s talk Toys R Us.

I stopped at my local Toys R Us store in Ohio on March 20th, the evening before liquidation officially began. At first glance, it didn’t look like a store that was about to close. The normal stock was all still there, mostly the same as it was when closing was still rumor and speculation (that may be part of the problem, but more on that later.) On my walkabout through the store, I overheard that that location in particular was trying to stick it out until some time in May. That timeframe is of course subject to how much of their supply sells off in the meantime.

This isn’t my wheelhouse, but I overheard someone asking for sports trading cards. I honestly had no idea that was still a thing, given how many digital card trading apps have popped up over the years. But hey, if there’s still a market for the physical stuff, have at it! One thing though – the vendor came and removed their stock of these cards. You’ll probably still find things more geared towards children such as Pokemon cards and others, but it seems that there’s a chance that over time, vendors may pull stock as the days begin to wind down.

Moving onto the important stuff, I saw some Star Wars Lego kits that were, by TRU standards, discounted. TRU is notorious for their markups, so while some kits such as General Grievous’ Combat Speeder and Ahch-To Island Training are marked down slightly, ‘marked down slightly’ still loosely translates to ‘cheaper at Target, probably.’ I didn’t notice any substantial markdowns on other themes such as City, or Marvel and DC Superheroes, but discounts aren’t out of the question as things wind down for TRU. Lego doesn’t allow their prices to go drastically low (to protect their brand) so if you see a deal, snag it while you can. As always, though, it pays to do your research ahead of time to get the best price. Also worth noting, the box for the TRU exclusive DJ polybag from The Last Jedi was empty. Either the bags were snatched up or Lego pulled them to redistribute. So if you still need to complete your Last Jedi collection, snag DJ if you can still find him in the wild.

Then there’s the six-inch elephant in the room, the Star Wars black series figures. My store only seemed to have three offerings left. There was good stock of their exclusive two-pack of Admiral Ackbar and the First Order officer. Another exclusive, Rey on Crait, was also in stock. Personally, I have a couple Reys already and I’m trying to decide which version(s) I’m going to buy going forward just for the sake of shelf space. I might still get this one because I’m a sucker for well-done soft goods. Anyway, last and certainly least, there were more Constable Zuvios in stock – like more than I’ve ever seen in one place, and they were still full price. I’ve heard around reddit’s collecting forums that more figures may be available stashed in the backs of stores, hidden away to either sell to those to ask or to send back to Hasbro. I was hoping to maybe find some old stock of the 40th Anniversary figures or more limited waves of figures, but I didn’t see anything. Overall, distribution is the real problem when it comes to Hasbro’s black series, so there’s no way to tell what figures will be available where, or when really. All offerings were still full price but may have 10-20% discounts starting soon.

Speaking of TRU store exclusives, it’s currently unclear what will happen to other planned exclusive figures. With Hasbro’s problematic distribution, it may be easier to pick them up online when they are released. There’s countless options for online retailer-exclusives as well as being exclusive to Target, Wal-Mart, or other department stores. It’s news I’ll be watching with great interest for sure, especially with the upcoming bounty hunter figures of Dengar, 4-LOM, and Zuckuss.

At the time of writing, Marvel Legends figures were still marked as buy-one-get-one-40% off. The assortment left a little to be desired, but there was a fair mix of figures for those looking to either fill in figures or part out peg-warmers for custom figures. I picked up Taskmaster from the Infinity War wave as well as Angela from the Guardians of the Galaxy 2 wave, but was disappointed that I was unable to fill in anymore of my X-Men collection. If they had the selection, this would be a fantastic deal for black series figures, but alas there’s no such deal.

So. Toys R Us is going away. The same problems as always plague the final days – poor distribution of product, backstock of products they can’t seem to get rid of, and there’s a shortage of deals to get old products moving out. It would seem all is lost but then OH MY GOD!!! 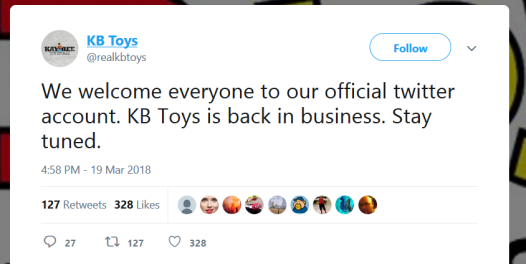 It’s official! KB Toys is back from the dead! Current plans are to have pop up stores by Christmas this year, and the team behind the revival wants to address current weaknesses in the toy market. What does all this mean? Will these pop ups lead to new storefronts appearing? Will KB pick up where Toys R Us exclusives left off? And will the toy market itself help ease the pain of modern toy hunting, or will it stay stuck in its old ways? With Hasbro’s plans to continuously improve its figure lines as well as the revival of Star Wars’ The Vintage Collection, maybe the collecting market is about to get a boost in the right direction!

I have fond memories of Toys R Us and KB Toys. Seeing one go is hard, but seeing another get a chance at rebirth gives me hope for finding toys ‘in the wild’ instead of online. Half the fun of collecting is the hunt for the products themselves. And while there are times I’ll do things online, when it comes to toy shopping, I really prefer a physical storefront. I always say that I don’t shop online very much for the same reason Batman doesn’t kill the Joker. If Batman kills the Joker, he fears he won’t be able to stop killing once he goes to that dark place. Well, I fear the limitless availability of literally all of the things online, so shopping in person helps me restrain myself a bit. Here’s hoping KB makes a strong return.