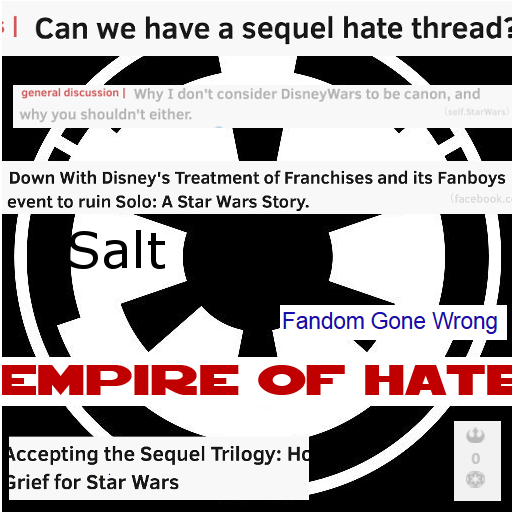 I’ll admit it, in the past I’ve been guilty of being a toxic person not unlike the many toxic fans polluting comment sections across the internet. I used to hate the Star Wars prequels because my friends didn’t like them. I used to treat any kind of music I didn’t identify with as worthless trash. And sure it made my friends laugh, but after a while you realize you don’t have as much in common as you first though, aside from a sour taste in your mouth.

This was originally going to be an article about tearing down overly-nitpicky arguments with equally-nitpicky arguments in favor of the decisions made by skilled creators of Star Wars content. And I’d throw in a few sarcastic comments and it’d all be hunky-dory. . .right? Well, no not really. No one can tell you what to love or hate in life, but there’s some basics being violated in the pursuit of being ‘right’ or being ‘correct’ or ‘being a superior fan.’ Is that’s what’s important? Of course it isn’t.

There’s been way too many stories to count lately about the toxicity and heavy criticism leveled toward Disney’s take on the Star Wars franchise. Kelly Marie Tran left Instagram after enduring months of abuse at he hands of fans who disliked The Last Jedi and/or her character Rose Tico. And it got so bad that costars John Boyega and Mark Hamill had to come to her defense. And some people out there were petulant enough to take credit for scaring a woman off her personal Instagram page. Then there’s the petitions to strike The Last Jedi from canon because some fans disagreed with the paths some characters went down during the sequel trilogy. Solo also had its share of controversy with cries of boycotting the film because The Last Jedi was some perceived slap in the face to fans.

Does this mudslinging sound like it’s solving anything? Any trolls out there celebrating getting a movie removed from canon? Anyone getting let go from Disney projects? Nope. This level of hatred is so extreme it borders on comical – that is until you get into the multitude of death threats directed at Rian Johnson and others, calls for Kathleen Kennedy to be removed from her position, and let’s not even get started on the usually god-awful fan pitches for how to erase canon events with future films through dream sequences and time travel. (This isn’t the X-Men franchise, we don’t do that here!)

The toxicity of current Star Wars fandom can’t be ignored, but we can’t feed the fire either. I’ve been taking notes to do this article for a while, and honestly I don’t have it in me anymore to write a full-fledged piece on it. I don’t feel like complaining about complaining. At the end of the day, these ‘fans’ need to grow up and realize that they might not love a franchise down to the last letter. And Star Wars is and always has been exactly that, a franchise designed to put out enjoyable content for a wide audience in exchange for that audience’s money. Disney is going to do what Disney thinks will make money, and so far it’s working except for Solo. . .and that’s only because, I don’t know, they RESHOT THE ENTIRE MOVIE THINKING YOU MIGHT LIKE IT MORE. (But if Solo was a mistake, by all means, give me more of those)

Think rationally when dealing with trolls online. Report what you can when somebody is being unnecessarily hostile. Block, mute, hide, unfriend – eventually these ‘fans’ might get the message about their message being harsh and annoying. Don’t let a hater bring down your good time with Star Wars, and don’t let anyone gatekeep you. There’s reasonable criticisms and dislikes, and there’s polarizing extremes, and it shouldn’t be up to any one of us to teach another fan how to ease up and try to have a good time.

Okay? So we can agree on a few things here, thinking rationally. What the ‘fans’ did to Kelly Marie Tran was wrong. Rian Johnson and his family should be allowed to continue living for as long as humanly possible. Films can enjoyed for what they are, not despised for meeting unrealistic expectations. The Last Jedi should stay canon. L3-37 is imperfect but fine. Sure, Solo wasn’t absolutely necessary but wasn’t it fun? And your friend who keeps going on and on about Solo’s box office numbers is probably annoying but ultimately harmless. Don’t kill them either.

Keep on trooping, and remember that the price of your ticket doesn’t give you any rights to hurt people.