I was going to put this together sooner, but a pesky flu and some technical difficulties got in the way. But now the show goes on as I take a closer look at my newest Black Series figures. Lego will always be my first love when it comes to Star Wars toys, but the Black Series is a close second. Let’s start with the namesake of Rogue Friday, the day these figures were released, with a new character from Rogue One. 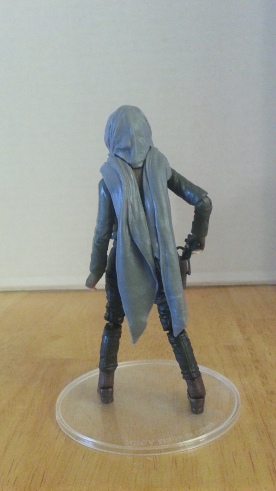 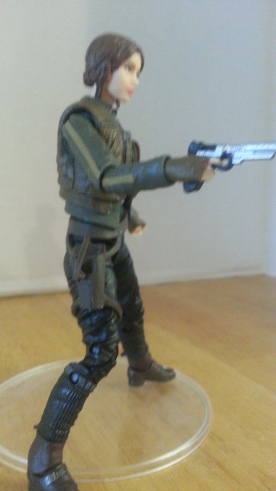 I like Jyn Erso a lot so far, and that’s saying something considering we know next to nothing about her yet. The figure has a good sculpt and the normal posability for this type of figure. Something I noticed was that the little strap on her holster comes undone, making it easier to draw and stash away her blaster pistol. I thought this feature was new, but I went back and checked out my Han Solo figure and his holster does that too. You learn something every day! Jyn includes a blaster pistol, which is cool but doesn’t look quite as Star Wars-y to me compared to other weapons. She also has a removable head scarf. It’s easy to get her posed and keep that trademark spunky attitude when on display.

Next is Cassian Andor, the Eadu variant. I didn’t know Target had a 3-pack exclusive of Cassian in another outfit plus Jyn and a Death Trooper variant (more on that later). I’ll have to keep an eye out for that and hopefully it is as plentiful as the last exclusive pack that included Poe Dameron (in the jacket he gives to Finn) plus stormtrooper FN-2199. I like the overall design of this figure with one exception – the face doesn’t quite look like the actor to me. Whether I should chalk this up to variation among figures or just a slightly off sculpt remains to be seen. I don’t hate it, and admittedly it does look a bit more like the real actor when the hat is removed (shame, because it’s a pretty nice hat) Regardless, the jacket is detailed very well with it’s padding and furry hood. The hat has a scarf coming down on one side, and Cassian includes a blaster pistol and blaster rifle. 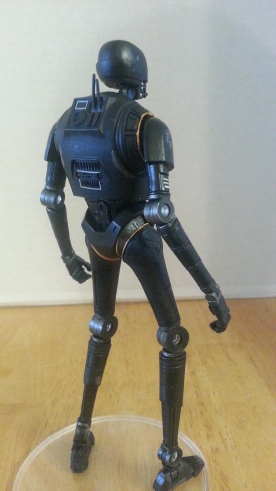 I bet K2SO steals every scene he’s in once the movie comes out. The figure is quite nice, with a sculpt resembling Imperial battle armor worn by General Veers and the like. The figure is the longest, lankiest droid I’ve ever seen, and he’s very posable. You can see in the third picture of him that he can channel Zenyatta from Overwatch and pose in a meditative state. K2 is nicely detailed and surprisingly can stand without a base, which I was surprised given how tall and awkward he is. 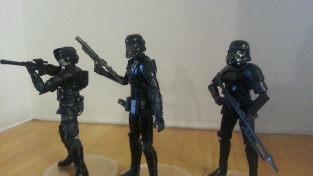 Next is the Death Trooper, part of the Imperial Security Bereau’s special forces under Director Krennic. This is one of two current variants. The other one, which in my opinion is more desirable, has different gear: same guns, but a shoulder pauldron and ARC Trooper style ammo pouches are added to the shoulder. As far as I can tell, that 3-pack comes later this month. Despite being slightly less interesting than that variant, there’s still plenty to like about this figure. He has Darth Vader’s belt buckle, a unique piece of knee armor, green eyepieces in the helmet, and unique weapons. This guy definitely captures the ‘don’t mess with me’ vibe of the Death Troopers. If you have the variant, they make a nice companion to Target’s two pack of shadow troopers. His height over everyone coupled with the black armor just makes him look mean. (Note: If you buy the 2-pack of shadow troopers, which I do recommend, that scout trooper doesn’t come with the sniper rifle; I had that lying around from another stroomtrooper variant and gave it to him) 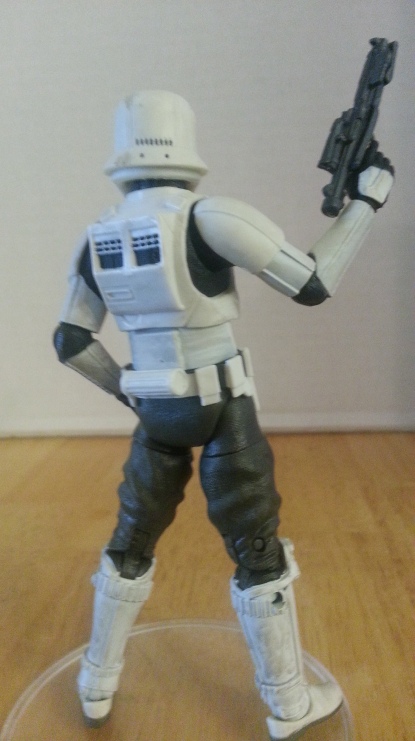 Wrapping up Rogue One is probably my favorite figure of the Rogue One wave thus far, and that’s the Hovertank Trooper. Like the Death Trooper, he captures that meanness and intensity of the utilitarian armor scheme. The shoulders are a new rubbery material that flexes if you pose the arm too far up, bending it in instead of stressing or damaging the edge. Nice touch there, I like that a lot. The armor is a sort of mash up of stormtrooper gear and scout trooper gear, with stormtrooper-like boots and light torso armor, plus a unique helmet. Instead of full leg armor, the figure wears dark brown pants over the black bodysuit all stormtroopers wear underneath their armor. He also carries a blaster just in case he’d have to leave the armored safety of his hovertank. There’s a lot of nice detail, especially in the dirt and grime on his boots and armor.  This figure is exclusive to Toys R Us. 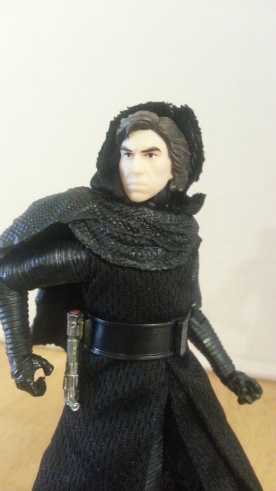 Kylo goes for his weapon 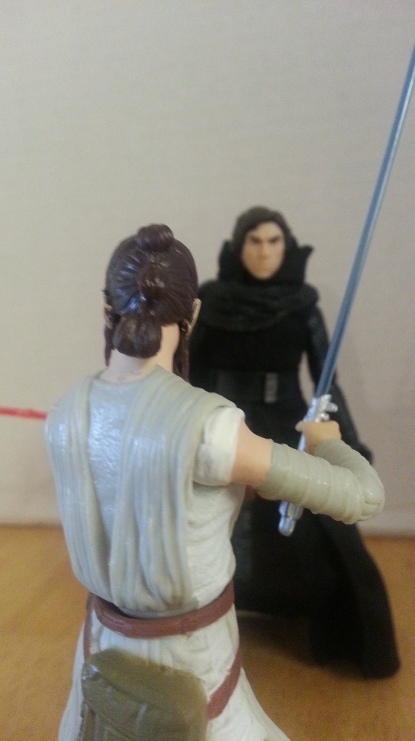 Lastly there’s the Force Awakens variants. A repackaged Rey now includes a lightsaber along with her signature staff and BB-8. Apart from minor differences, it is the same figure that has been available for a while now. I found her to be slightly difficult to pose when holding the lightsaber with both hands, but I noticed their may be a slight defect in the joints of my figure’s left arm. Could be damage, could be an error. I’m not exactly sure, but I like the figure and had been wanting one with a lightsaber. Kylo also appears to be an identical figure, but with changes to his accessories. This variant swaps his mask (the entire head) for the face underneath. I thought there would be an injured variant with the scar on his face, but I’m sure that will be coming for Episode 8. The other changes are regarding his lightsaber. He now includes two sabers, a new ingnited blade that is molded to the hilt (no weird three-pronged thing with the extra ‘energy’ going around it to hold it together) and an extra hilt with no blade, which can attach to a new notch in his belt. My only complaint, albeit a small one, is that like Cassian, his skin tone isn’t quite right. They both appear a little too pale to me. But skin tone is very difficult to transale into plastic, so I’m not holding that against anyone.

Overall, I enjoyed unboxing all these figures and adding them to my sizeable Black Series collection. My favorites are almost always new Imperial troopers, and this was the case yet again this time around. I was super happy to be able to purchase so many this time around as well. I went rather late in the day on Rogue Friday and was still finding good toys stocked on the shelves. This wasn’t the case for Force Friday, the previous event, where all the Force Awakens toys were revealed. So good on you, whoever makaes that sort of thing go more smoothly. Target had great promotions that rewarded you for going big on your purchases and I hope they do things similarly in the future for Episode 8’s theme day and the eventual other spinoff reveal days. It seemed much smoother this time, so let’s hope it gets even better when we do this all again next year!

Thanks for reading! If you liked this rant and review, leave a like or let me know in the comments. Also, if there’s something you’d like to see, drop me a comment or an email and I might make a post about it!