The Force works in mysterious ways. It binds us, penetrates us, and makes us stress shop. During my technical difficulties yesterday, I stopped by Wal-Mart to see if anything was left in the Star Wars section after Rogue Friday. As luck would have it, I found two more Black Series figures from my wishlist! Check out this special addendum to my previous review with two more figures, Jango Fett and Kanan Jarrus.

Anyone who knows me knows I love Mandalorians almost as much as I love the Empire and finding the last toys on the pegs at the store. Both Jango and Kanan were the last figures I could find at the store, and I have a huge weakness for buying the last thing I can find of anything related to Star Wars. I know I’ll either never see it again (until the price is likely jacked up on Amazon) or I’ll see dozen of them in two months. But I never know which one it’ll be, so buying the last ones usually gets the best of me.

Jango Fett (Attack of the Clones)  is a wonderful figure. He’s heavy with all of his well-detailed armor. The removable helmet isn’t flimsy. The jetpack has three placement pegs to keep the jetpack in place and level. The pistols are also more durable than I expected, which is something I appreciate because sometimes the weapons with these figures can be bent or just downright flimsy and fragile. There’s plenty of detail to take in; dirt and grime in the armor, tarnish marks, the knee-mounted dart launchers, and a nice dent from when he hits his head on Slave One’s loading ramp door in Episode 2. The head mold also looks pretty good. He’s missing the actor’s stubble, but maybe this is just Jango looking a little more cleaned up than normal. The figure looks and feels so right in every other regard that this one detail gets a pass for me, especially since I probably won’t remove the helmet terribly often. 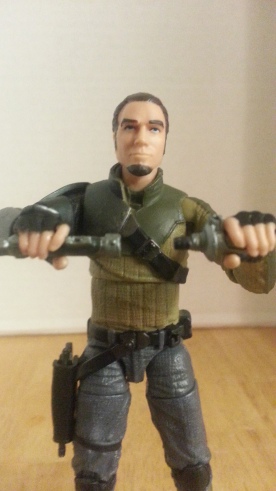 Onto Kanan from Star Wars: Rebels, this is another example of Hasbro stepping it up with the quality of these figures. Taking an animated character and making him look ‘real’ is no simple task, and it was pulled off very well with this figure. All the details are there, from his shoulder armor down to his lightsaber that actually dissasembles the way it does on the Rebels show. The blade is removable, and then the hilt of the lightsaber can be stashed away in two pieces on the frontand back of his belt. Kanan also includes his signature blaster pistol that fits into a hip holster. Out of the few heroes in my Black Series collection, this is definitely a new favorite!

All in all, I love these figures and love that I was able to find them even more! I’m old school when it comes to buying things. I like to hold it in my hands first before I take it to the register. That is especially true with these toys, as their can be flaws such as bad paint and flimsy or bent weapons to deal with. But the other reason I don’t buy many of these online is something I often compare to the philosophy of Batman. Batman never kills the Joker, even though it could save lives every time the Joker escapes imprisonment. He can’t kill the Joker because if he let’s that violent part of him see the light of day, he will never stop, and he would destroy every last one of his enemies and become just as bad as them. My fandom isn’t so dramatic, but it boils down to the fact that if I buy one thing on the internet, I will soon BUY ALL OF THE THINGS.

Go find your toys! Love and support the fandom!

Thanks for reading this! If you enjoyed what you read (or even if you hated it, to each their own) let me know in the comments section! Leave a like if you are so inclined and subscribe to get notified every time I post something about my love for Star Wars. If you have an idea for something you’d like to see, let me know in the comments and I might make a post about it!