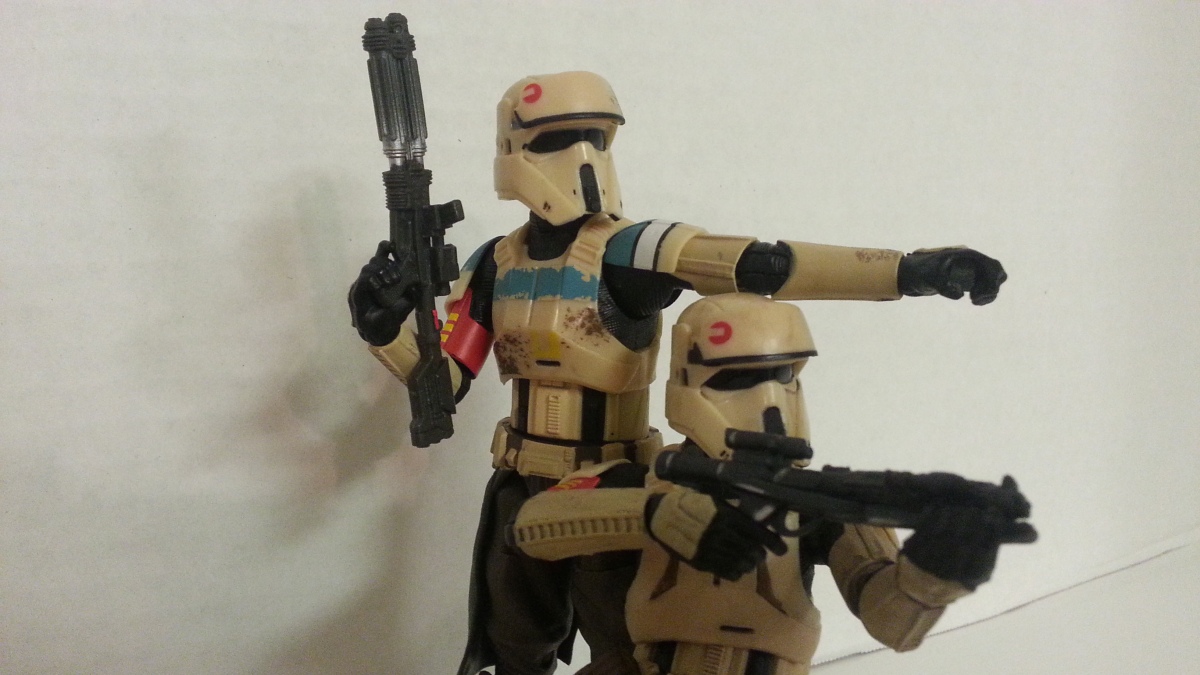 Tying the end of the Clone Wars into the Galactic Civil War era, Scarif Stormtroopers aka Shore Troopers feature Imperial-style armor with Clone-esque customizations. Rogue One gave us a great story and some new Stormtrooper variants to stand alongside the mighty ranks of the Empire.

First up, the basic Scarif trooper. These troopers are present in Rogue One during the battle of Scarif, tasked with patrolling and protecting the beaches and islands of the Imperial facilities on Scarif. This figure is a great representation of the on-screen troopers with sand-worn details on the armor and great overall paint applications.

This trooper is exclusive to Wal-Mart, which is a strange release choice – this regular or grunt trooper is an exclusive release, while the Scarif Trooper Squad Leader is the wide-release figure available in other stores. The figure, like most that are relatively new or close to the movie release, does cost more on Amazon or from other sellers. However, the Wal-Mart near me in Ohio (which doesn’t tend to get the best releases or restocks for whatever reason) did have several of these figures available when I purchased mine in-store. Whether or not that is common is really anyone’s guess – sometimes stores over-order, under-order, or don’t get restocked. So if it’s a must-have for you the way it was for me, pick it up when you see it.

Back to the figure itself, the armor molds are the same as the Rogue One Hovertank Pilot (minus some changes to the helmet) recolored in a sandy tan. The armor is marred with deposits of sand and worn from its service on the tropical planet Scariff. The shoulders bear unit markings of some kind, which I’m sure will get a backstory later on, and the helmet also has an orange marking matching the Squad Leader figure. Overall the armor itself is similar to scout trooper armor, with flaps of armor protecting the hips while the legs are left largely unencumbered, allowing the trooper some mobility. These armor flaps actually don’t hinder the movement of the figure as much as I expected they would, though I suspect long-term posing may bow them out of place slightly.

The Scariff trooper has what has become standard articulation, lacking some points but still well-articulated overall. He is able to aim his included E-11 blaster, stand well on his own without a figure stand, and looks great alongside the rest of the new Rogue One troopers. I would recommend this figure overall, especially to Empire and trooper collectors like myself. 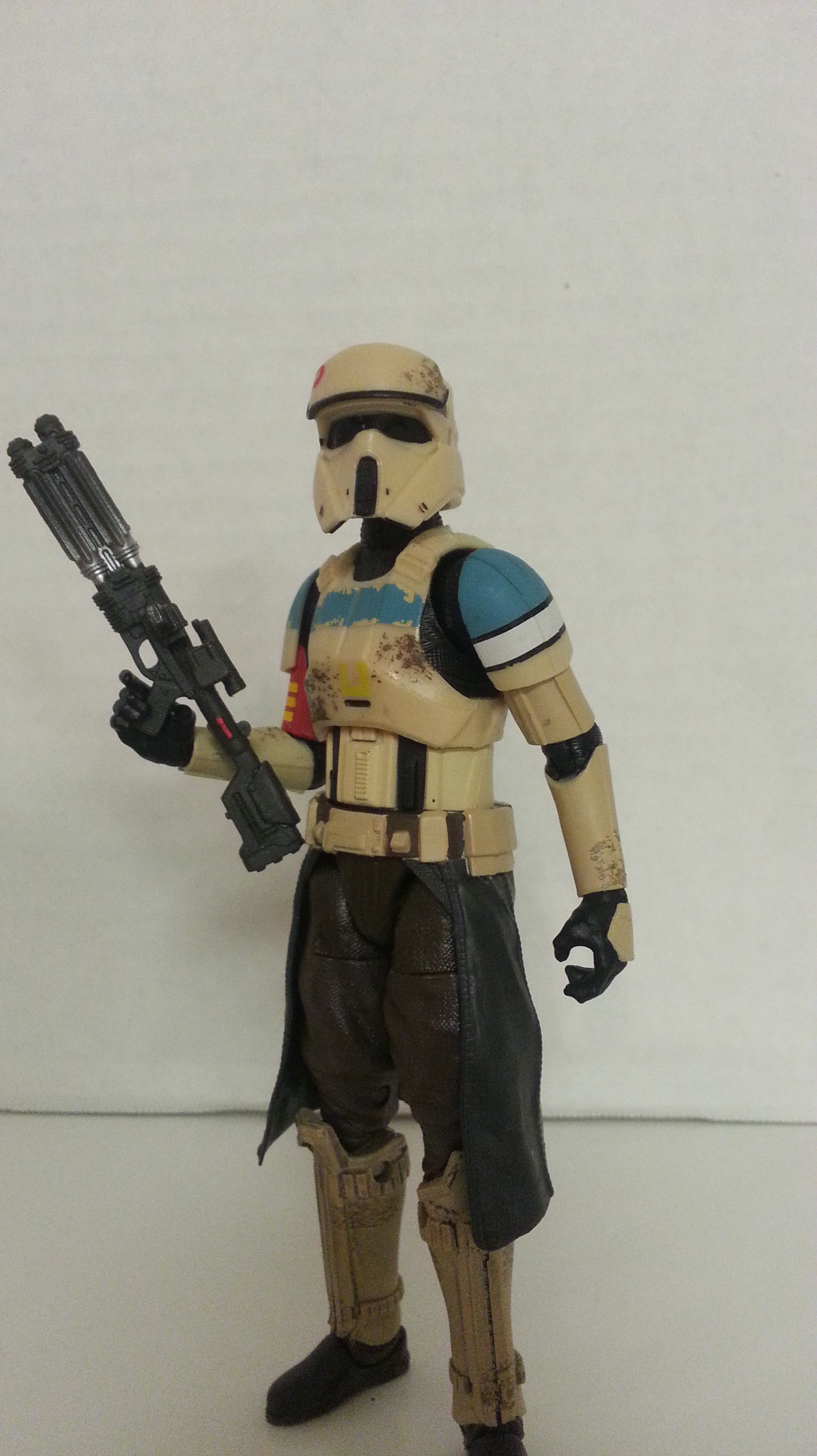 Next up we have the Scarif Trooper Squad Leader, the wider release version of this figure. I’ve seen this figure going for about 1 1/2 times retail, so picking him up sooner than later if you see him available for retail would be best. If I remember correctly, I found this one at Target along with the Resistance Base C-3PO (aka who is that with the red arm?)

Despite being more widely available, the Squad Leader is an upgraded version of the Scarif Trooper. His paint job has different weather patterns, harsher ones actually, which imply this trooper has seen more action than the others. The hip armor plates are removed in favor of a Clone Commander/ARC Trooper-style kama, and additional sky blue and orange unit markings are added to the chest and shoulders. I’ve always been a fan of the looks and color schemes of ARC Troopers and Clone Commanders, so seeing an OT era trooper influenced by those looks was really fun to see.

The Squad Leader, being largely the same figure, is articulated the same as his lower-ranked counterpart. Like the hip armor on the other figure, the kama is surprisingly doesn’t hinder the trooper’s leg movements. The exception there is, of course, you want the trooper to be able to sit. Included is a new weapon mold, the E-22 blaster rifle. Like the standard E-11 of its counterpart, it features some silver/grey weathering marks all along the weapon. This beefed-up, double-barreled version is unique to the Scariff Trooper Squad Leader and enforces a commanding presence.

Overall I would recommend both of these figures highly. Like all the variants before them, they immediately take you back to specific scenes in the films. I can’t see a scout trooper without thinking of the high-speed chase in Return of the Jedi, or sniping Rebel scum in Star Wars: Battlefront II. Standard troopers take me back to the Tantive IV being boarded by Lord Vader. And now these troopers take me back to the brutality of the Battle of Scarif as the beaches are engulfed in smoke and a space battle rages overhead. They don’t have the same mystique as the Death Troopers, but they really aren’t meant to – they’re a different breed of specialists in the Imperial Army. And it’s part of my head canon that the Empire fails partly because it has too many awesome trooper variants to produce armor for – doesn’t anyone keep track of how expensive that must be? Maybe that fight at Endor would’ve turned out differently if there was an Imperial teddy bear deterrent division. . .

Thanks for reading! If you want, let me know what you thought in the comments. I’m open to ideas and requests! And remember, as always, enjoy the toy.