Lego’s representation of Rogue One’s new TIE variant does not disappoint – check out the Empire’s Elite review of this mighty fighter!

First off I have to say that the wingspan of this fighter is big – I had to go to the craft store for some new backdrops and I still didn’t fit it all into every shot! Above you’ll see the fighter in its attack configuration with the wings raised. Two sturdy levers at the back raise and lower the wings from normal flight to attack position. Included in the set are four minifigures: A rebel trooper, a Scarif trooper, TIE pilot, and Imperial grounds crew member. This set retails for $69.99 here in the US. 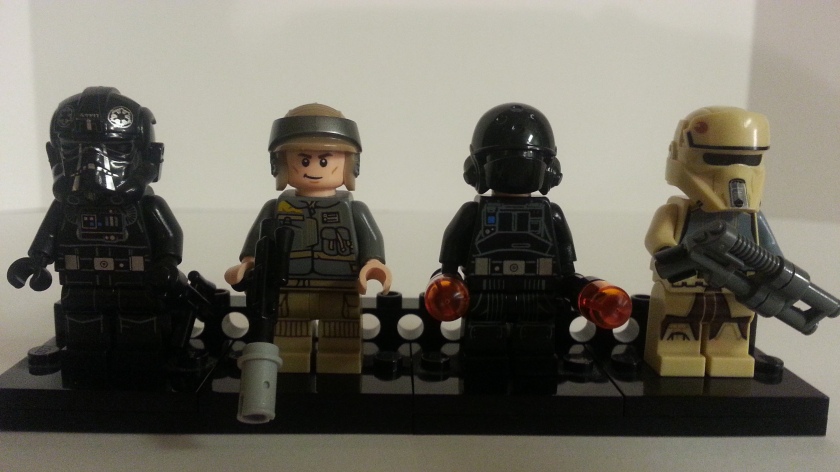 The figures in this set are pretty good, though for the price point I would have liked to maybe see another Scarif trooper or something. I can’t complain too much about the price point versus number of figures since this set was a Christmas gift, but under normal circumstances, I would wait for it to either go on sale or use some of those handy Lego VIP points to get a few bucks off.

The rebel trooper features a two-sided face, one with a smirk and one looking terribly cross with somebody. He includes a blaster with a technic pin at the end, simulating the silver-tipped rebel blaster rifles. Both the Scarif trooper and TIE pilot feature the ‘angry clone’ face I’m sure we’re all familiar with by now. The Scarif trooper has an E-22 blaster rifle comprised of a pistol with binoculars attached to the barrel to recreate the longer, double-barreled blaster. Our TIE pilot includes a standard blaster rifle and has updated printing on the helmet and legs. Last but not least, the grounds crew trooper includes two batons for directing flight traffic. His helmet mold is a modified version of the Imperial Death Star Gunner figure, which the back shored up and some new indentations on the forehead. His face isn’t the angry clone, but instead a fairly standard face with a comlink/earphone headset. If I had to pick a favorite out of this bunch, I’d have to say it’s the grounds crew trooper. I love the new Scarif trooper, but something about the bizarre specificity of the grounds crew trooper is really entertaining to me. I honestly want to incorporate several of these guys into a MOC base, having them directing ships and supplies around a crowded landing zone. 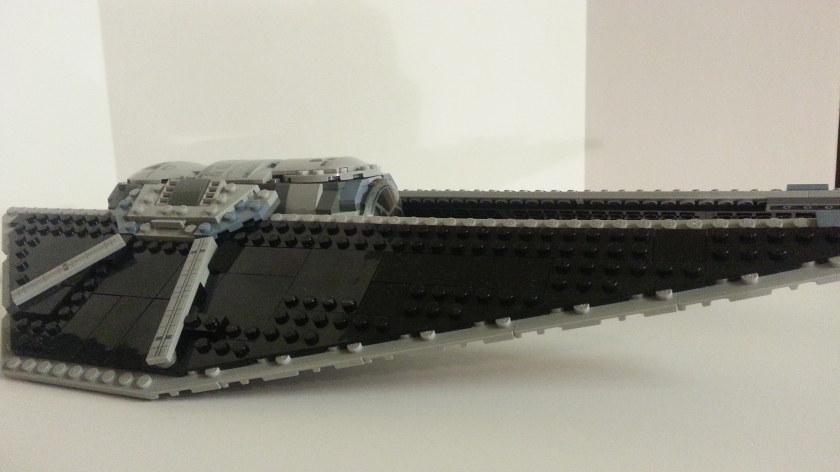 Speaking of bizarre specificity, the TIE Striker is designed for in-atmosphere combat and protecting Imperial facilities planetside. It’s wings are designed similarly to real-life fighter jets, making them aerodynamic in a way that regular TIE fighters generally don’t need as much due to their heavier usage in space. The wingspan of this fighter is HUGE, which brings about my only nitpick of this set – it doesn’t scale well with most other sets, even other TIE fighters. But that’s more of a nitpick at Lego builds in general, as they don’t often stick to one scale. However, that doesn’t detract from the fun I had building this beast at all.

As you can see, the wings of the TIE bring its overall length to over the size of two comparable fighters.

The build overall is fun and interesting. As I mentioned, the levers that control the wings are sturdy and stay in place. Several pieces in a sandy blue (or as I’ve been calling it, Rogue Blue because it’s in so many Rogue One sets) are included to give a little pop of color to the underside blasters, the wings, and cockpit. The cockpit features a battle droid body for the control sticks, which is a design Lego has used before in the Inquisitor TIE Fighter set. An attached cheese wedge piece allows the controls to sit back at an angle for the TIE pilot to reach out for them. The cockpit glass is the same as recent TIE Fighters, the thin hinged piece that is far superior to the bigger dome or bubble cockpit of previous TIEs. This build is very accurate to the film, though I do wish there was maybe a little room to fit troopers inside. I’m not sure if it was a slightly different model of TIE Striker, but I remember in Rogue One (during the Battle of Scarif) that a TIE Striker carried a squad of Death Troopers to try and retake the communications station. I like the role of an in-atmosphere TIE that can also ferry troopers around, but nothing says you can’t pretend that this TIE model does that too!

For the money, the set is not a bad value at around twelve cents per piece. Personally I would’ve liked to see another Scarif trooper or another Rebel trooper, but I’m slightly biased because I like the ground crew trooper so much. For what it’s worth, the Scarif trooper and ground crew trooper are both exclusive to this set – however, other variants are coming in March with the Battle of Scariff set (which includes two ‘standard’ Scarif troopers and Jyn Erso disguised as a ground crew trooper.) The strengths of this build are in its faithfulness to the movie, and I’m glad there wasn’t an arbitrary piece of small scenery or anything, because the build uses all of its pieces well (I say that because the little moisture vaporator-looking thing that came with the Poe’s X-Wing set was silly to me)

This set might go down some in price in-store since Rogue One has come and gone, so look out for promos, sales, or (if you dare wait to the last minute) clearance. You will not be disappointed with this one.

Thanks for reading! Let me know your thoughts on the new fighter in the comments, or say whatever is on your mind about Star Wars. If you have any ideas for posts, let me know and I might put something together!

As always, enjoy the toys!